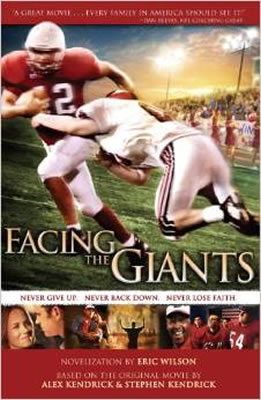 You’ve seen the movie! Now discover the full story in the Facing the Giants novel.

Follow Coach Grant Taylor and his Shiloh Eagles football team on their exciting adventure as they take on their giants on and off the field. Collaborating the movie screenplay, scriptural inspiration, new story elements developed by the Kendrick brothers, and the creative mind of novelist Eric Wilson, Thomas Nelson publishers is pleased to announce the release of Facing the Giants in novel form. This exciting telling of Facing the Giants includes additional back story, subplots, new characters, and production photos and bonus materials not in the movie.