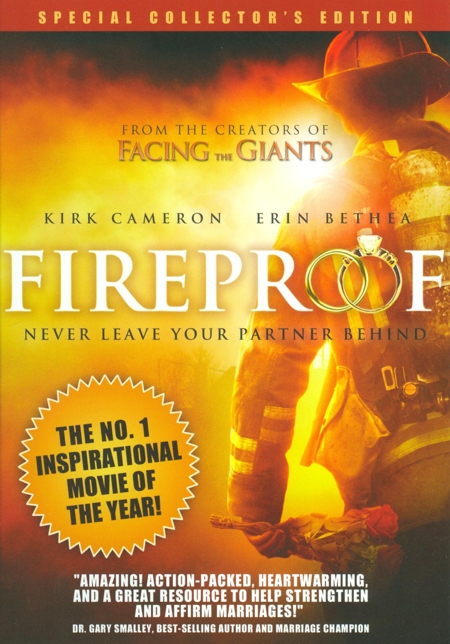 The Special Collector’s Edition DVD of Fireproof, the highest-grossing Christian film after The Passion of Christ, hits stores Jan. 27, 2009.  Starring Kirk Cameron, Fireproof is the micro-budget movie from Sherwood Pictures in Albany, Georgia, that opened at no. 4 in the nation and spent three weeks in the top 10 (eight weeks in the top 13).

It’s the story of a firefighter and the failing marriage he is willing to leave behind. But a challenge from his father may just open Caleb Holt’s eyes to the love he has at home and the love he has in Christ.

Thank you for your business, buying your copy of Fireproof here aids in the Ministry of Sherwood Baptist Chruch and to our community!

Fireproof is the third movie from Sherwood Pictures, headed by Sherwood Church Senior Pastor Michael Catt, Executive Pastor Jim McBride, and Ministers Alex Kendrick and Stephen Kendrick.  Sherwood’s first film, Flywheel, in 2004, has sold 200,000-plus DVDs.  Its second, Facing the Giants (2006) earned $10.1 million at the box office and has sold more than 1.6 million DVDs in 58 countries (14 languages). Fireproof also stars an all-volunteer cast of almost all first-time actors.  It was co-written by brothers Alex (director) and Stephen Kendrick (producer) and produced by a 1,200-member cast and crew.

Fireproof is dubbed in Spanish and has subtitles in English, French, Spanish, Portuguese, Chinese, Russian, Korean, and Arabic. The movie’s total running time is 1 hour and 58 minutes.