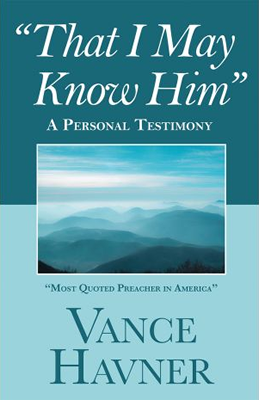 That I May Know Him

This book is the closest Vance Havner ever came to writing an autobiography. It tells of his boyhood years spent in the hills of North Carolina, his conversion at ten years of age, the obtaining of a preaching license at twelve, and his ordination at fifteen. Brief accounts are given of his high school and Bible college years, along with a brief history of early pastorates and evangelistic travels. In his usual forthright manner he tells about his short dalliance with modernism and his subsequent return to the old-time gospel message. “My preaching was of the ‘repent as it were and believe in a measure or you’ll be lost to some extent’ variety,” he recalls. Had he stayed there, his ministry would almost certainly have been less fruitful for God’s kingdom, and you and I would probably never have heard of him. He also records dark valleys, including times of depression and physical breakdown; but he includes many high points also. If you ever wanted deeper insights into the life and labors of America’s most quoted preacher, look no further. “Why can’t we just be Christians?” he asks. “I am going up and down the country endeavoring to call men back to the Center. We get lost out on the circumference. I am not organizing anything. I have no blanks to sign, no buttons to wear. I am not trying to start a new movement.... We need an outbreak of New Testament Christianity that will make an impact.” His ministry continues today through his many books.