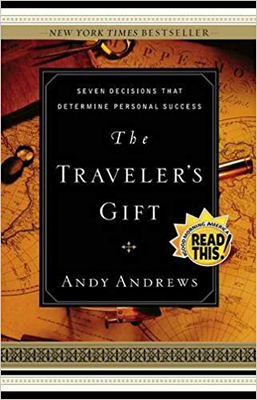 A divine adventure is about to unfold . . .

Only a few months ago, he was a successful executive. Now he’s a desperate man. Join David Ponder on an incredible journey to discover the Seven Decisions for success that can turn any life around, no matter how hopeless a situation may seem to be.

In times of great uncertainty, we need divine wisdom. Many of the greatest minds throughout history have overcome personal struggles and adversity and emerged stronger for it. What guidance would iconic heroes like Abraham Lincoln, King Solomon, and Anne Frank give us in today’s ever-changing world climate?

The Traveler’s Gift has become a publishing phenomenon, coexisting simultaneously on the bestseller lists of the New York Times, Wall Street Journal, USA Today, Publisher’s Weekly, Barnes & Noble, and Amazon.com. And in a stunning, unheard-of display of such wide appeal, The Traveler’s Gift was placed (again simultaneously) on these lists as fiction, nonfiction, business, religion, self-help, and literature!

The book has been required reading for some of America’s high schools, an aid to “principled rehabilitation” by the Supreme Court of Tennessee, and a “life skills” tool for the members of several franchises of Major League Baseball and the National Football League. The Traveler’s Gift is also used extensively in corporate climates all over the world by such companies as Microsoft, General Motors, AIG, Legg Mason, and KFC. In fact, The Traveler’s Gift has been hailed by some critics as “the business book of the century!” With a disarming grin and humble shrug, Andrews notes, “Well . . . it has been a very short century!”

Perhaps the most astounding fact about The Traveler’s Gift might be that, for all its success, the manuscript was turned down by fifty-one publishers before it was finally accepted after more than three years by Thomas Nelson Publishers. Now, of course, Andrews can laugh. “The seventh decision,” he says, “is ‘I will persist without exception.’ If anyone knew how many times I locked myself in my office and read my own book—they’d be amazed.”