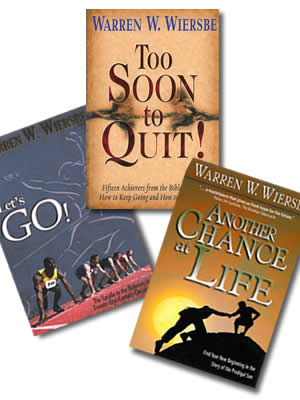 In need of encouragement to stay the course when the journey is hard? Perhaps you are seeking hope that is found in the story of The Prodigal Son. Or possibly your “less than faith” could use a dose of “more than conqueror” found in a study of Hebrews. There’s something here for everyone.

Too Soon To Quit

Ready to quit? You re not the only one.

Flip through the pages of Scripture you're in good company. Warren Wiersbe unfolds the stories of fifteen Bible characters that struggled just like you - people we now consider high-endurance saints, such as Abraham, Job, Ruth, Habakkuk, and Paul.

With the skill of a master storyteller, Wiersbe draws from the pages of God's Word to give us the strength to survive and thrive when the road gets rocky and the path steep. Get your second wind from these fifteen faithful lives and learn that it's too soon to quit!

Another Chance at Life

Find Your New Beginning in the Story of the Prodigal Son

When you’ve really blown it…. . . is there is any way out of the mess? In his unique depiction of the prodigal son, Warren Wiersbe examines the cast of characters from this well-known story and draws lessons from each individual. Find yourself in the wasteful son, or perhaps in the spiteful brother, and recognize afresh the One who can forgive every sin-our merciful Father.

If you’ve left the path of grace and think you’ve gone too far, or if you simply need a reminder of God’s mercy and love, this book holds a welcome dose of encouragement. Your Father is waiting to receive you, ready to give you another chance at life.

Does the book of Hebrews seem daunting to you? Let Warren Wiersbe unfold principles from this timeless letter which can turn quitters into conquerors and produce a vibrant, productive faith.

As you study the book of Hebrews along with Wiersbe, you will grow in your walk with the Lord, mature in your faith and discover the calling He has for you. 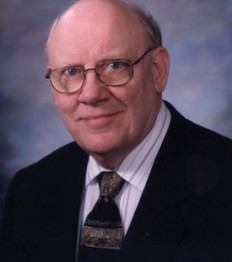 Warren Wendel Wiersbe is an American pastor, Bible teacher, conference speaker and a prolific writer of Christian literature and theological works. Born on May 16, 1929 in East Chicago, Indiana, Wiersbe is perhaps best known for his series of 50 books in the "BE" series: Be Real, Be Rich, Be Obedient, Be Mature, Be Joyful, etc. and other theological works.

Warren Wiersbe studied at Indiana University in Indianapolis, Roosevelt University, and graduated in 1953 from Northern Baptist Theological Seminaryin Lombard, Illinois. While attending the seminary, he was ordained as pastor of Central Baptist Church in 1951 and served until 1957. From September 1957 to 1961, Wiersbe served as Director of The Literature Division for Youth for Christ International. From 1961 to 1971 he pastored Calvary Baptist Church of Covington, Kentucky south of Cincinnati, Ohio. The church grew from a church seating a congregation of eight hundred to build a new church seating of two thousand. This church drew members from the Ohio, Indiana and Kentucky Tri-state Area. His Sunday sermons were broadcast as the “Calvary Hour” on a local Cincinnati radio station. From 1971 to 1978, Warren Wiersbe pastored Chicago's Moody Church, named for 19th century evangelist Dwight L. Moody. While At Moody Church he continued in radio ministry to include Speaker on “Songs in the Night”, a national radio program that moved to Moody Church in 1968. Between August 1979 and March 1982 he wrote bi-weekly for Christianity Today as “Eutychus X”. Also during this same time frame between 1978 to 1982, Warren Wiersbe taught practical theology classes at Trinity Evangelical Divinity School in Deerfield, Illinois and wrote the course material and taught, "Imagination and the Quest for Biblical Preaching", a Doctor of Ministries course at Trinity and Dallas Seminary. While pastoring in Chicago, Warren Wiersbe served on the board of Slavic Gospel Association (SGA) from 1971 to 1983, ten of those years he served as chairman of the board. From 1980 to 1990 he went to work for Back to the Bible radio broadcasting network and served as general director the last six years of his time there. In 1995, Wiersbe became Writer in Residence at Cornerstone University in Grand Rapids, Michigan, and Distinguished Professor of Preaching at Grand Rapids Theological Seminary. A contributing editor to Baker Book House. He has been writing books since the 1950s under several publishing house labels; completing more than 150 books including the popular BE series of commentaries on every book of the Bible which has sold over four million copies. Warren Wiersbe was awarded two honorary Doctorate Degrees and has accumulated in his personal library more than 10,000 books; some times referred to as “the pastor’s pastor”, Dr. Wiersbe has become a well known and trusted Bible theologian and scholar throughout Fundamental and Evangelical circles.