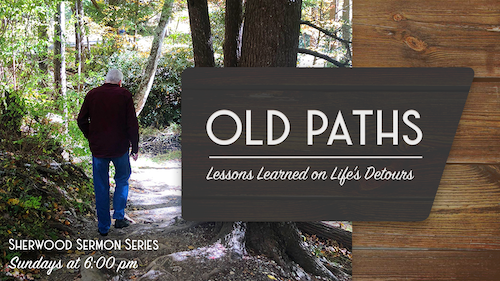 If you travel the road of life long enough, you will learn there are lessons in the detours. In the last message, we looked at how to respond to diï¬ƒculties and setbacks biblically so the enemy doesn’t gain a foothold in our hearts and minds. From a human perspective it may look like trouble, but with a biblical perspective we can see triumph. Because of our victory through Christ, we are trophies of His grace, on display behind our conquering king. The only triumph we can ever have begins with Christ’s triumph over us. He has won, so we would do best to surrender completely to Him, die to self, and stop ï¬ghting for control. He’s marching on conquered ground!

No matter what your theological persuasion may be, if you are honest, you struggle with God's sovereignty at times. What you really struggle with is that God's in charge and you're not. The reason we like the health-and-wealth gospel is because it gives a false hope of life without pain, sorrow, or disease. But if you’ve lived long enough, you’ve seen good, godly people who have suï¬€ered. We want our doctor to be truthful. We want politicians to be truthful (although that's rare). We should also want preachers to be truthful.

I. THE MISCONCEPTIONS OF MANY REGARDING TRIALS AND THORNS

Nineteen-hundred years ago, the Apostle Paul was faced with a prayer that wasn't answered the way he had hoped – and a promise that was given in spite of the “no” answer.

The thorn reminded Paul he was needy. He needed God's grace and strength to minister. Think about Paul:

II. THE MOMENT OF A CHANGE IN PERSPECTIVE

Paul had to rebuke the Corinthians in his ï¬rst letter to them because they were full of themselves. They thought they had arrived, that they were God's gift to their city.

“When I ï¬rst became a Christian...I thought that I could do it on my own...and not go to churches. I disliked much their hymns, which I considered to be ï¬fth-rate poems set to sixth-rate music. But as I went on I saw the great merit of it. I came up against diï¬€erent people of quite diï¬€erent outlooks and diï¬€erent education, and then gradually my conceit just began peeling oï¬€.” – C. S. Lewis

III. THE MOMENT WHEN HE PRAISED GOD FOR THE THORN